Parler could still return to the App Store, according to Apple CEO Tim Cook in a podcast interview, in a wide-ranging discussion covering Apple’s inbound App Tracking Transparency measures, Parler, and his dealings with Donald Trump.

Speaking to Kara Swisher on the “Sway” podcast for the New York Times, initially teased on Saturday and published on Monday, the Apple chief entered a conversation covering many areas of interest for Apple, as well as straying into subjects that involved Cook more directly.

The Capitol attack in January dragged Apple into political mudslinging, due to the use of social media app Parler by attackers to coordinate the illegal activities. After a 24-hour warning to clean up its act, Apple then pulled Parler from the App Store.

While Cook said in January Parler could rejoin the App Store once it complies with Apple’s Terms of Service, the app has so far failed to resurface on Apple’s platforms. In March, it was revealed Apple had rejected Parler for failing to comply with App Store Review guidelines once again.

The app removal prompted an appearance on Fox News by Cook, where he was asked if Apple and other tech companies were restricting free speech over the matter. At the time, Cook defended the App Store as a “private platform with its own rules” that developers must abide by.

When asked how Cook and Apple thought about the decision to pull Parler, Cook said “In some ways it was a straightforward decision, because they weren’t adhering to the guidelines of the App Store. You can’t be inciting violence or allow people to incite violence, you can’t allow hate speech, and so forth. And they moved from moderating to not being able to moderate.”

After giving Parler a chance to rectify the situation and taking the app down, Cook reiterated that he was still open to relisting Parler, “because we worked hard to get people on the store, not to kick people off the store, and so I’m hoping they put in the moderation that’s required to be on the store and come back.”

“Because having more social networks out there is better than having less.”

On comments by former Parler CEO John Matze claiming he didn’t have any responsibility for the users of Parler’s activities, Cook simply responded “That obviously doesn’t adhere to the App Store terms and conditions.”

With the sudden implosion of the app at the time from tech companies distancing themselves from it, Swisher proposed this action could have occurred earlier. Cook maintained that “it happened as soon as we became aware of it, and I’m not sure it would’ve taken the Capitol event for that to occur. We would’ve taken it off when we became aware.

The affair rolled on into April, with Republican lawmakers on House and Senate antitrust committees writing to Apple, Google, and Amazon over Parler’s dismissal. Hearings were also performed with tech giants in March, querying whether the tech companies bore any responsibility over misinformation spreading ahead of the attack.

When asked how he would’ve answered the question of responsibility for spreading misinformation, Cook said he would only be able to speak for Apple, but that “from the very start we’ve always believed in curation, and so we review every app that goes on the store. That doesn’t mean that we’re perfect at doing it, we’re not, but we care deeply about what we are offering our users.”

“And when we have a news product like Apple News, we have human editors that are selecting key stories, and so they are avoiding all of the misinformation that is out there.

“The reality is that the web in some areas has become a dark place, and without curation you wind up with this firehose of things that I would not want to put into an amplifier,” Cook continued. “Which is what tech is in a large way. If you have a platform, you amplify things.”

On whether Cook considers Apple an amplifier, he refers to the human editors in Apple News, and that the App Store doesn’t “push” content onto its customers like a social media company. “We want that to be a trusted place.

Apple’s responses are arguably extremely important over the event, as it is under intense antitrust scrutiny over how it handles developers that use the App Store, among other competition and market-related probes.

For social media culpability, Cook admits he was worried about its amplification and targeting tools being used for misinformation purposes. “It’s incumbent on all of us to take a step back and ask what were the other contributing factors , because we don’t want to repeat it. This was one of the darkest days in our history.”

On liability and Section 230, Cook agrees that it is “time to revisit 230” as it was “written at a time prior to lots of things that have come into existence.” However, Cook doesn’t have a “perfect answer” to revise Section 230.

On the subject of user data and privacy, Cook insists regulation is needed, “because I continually saw companies continually going outside of what I thought were reasonable rails.”

Apple has historically provided users with a high level of privacy surrounding personal data. Over the years, Apple and Cook have held the view of privacy being “a human right,” with Cook claiming in January that privacy is “one of the top issues of the century.”

Cook mentions the freedom of users being eroded by data aggregation, before referring to comments made by founder Steve Jobs in a similar interview a decade ago, that “the individual should own their data, and they should own the ability to say who gets it.”

While Apple has previously implemented various rules and features with an aim to enshrine privacy, initiatives within the last 12 months have prompted a negative reaction from some critics, for a few reasons.

For example, the introduction of “nutrition labels” on App Store listings detailing how an app may collect or use a user’s data. The move has led to complaints from the Facebook-owned WhatsApp that the app didn’t provide nuance to users about how data is protected, nor that Apple’s own preinstalled apps don’t receive similar treatment. 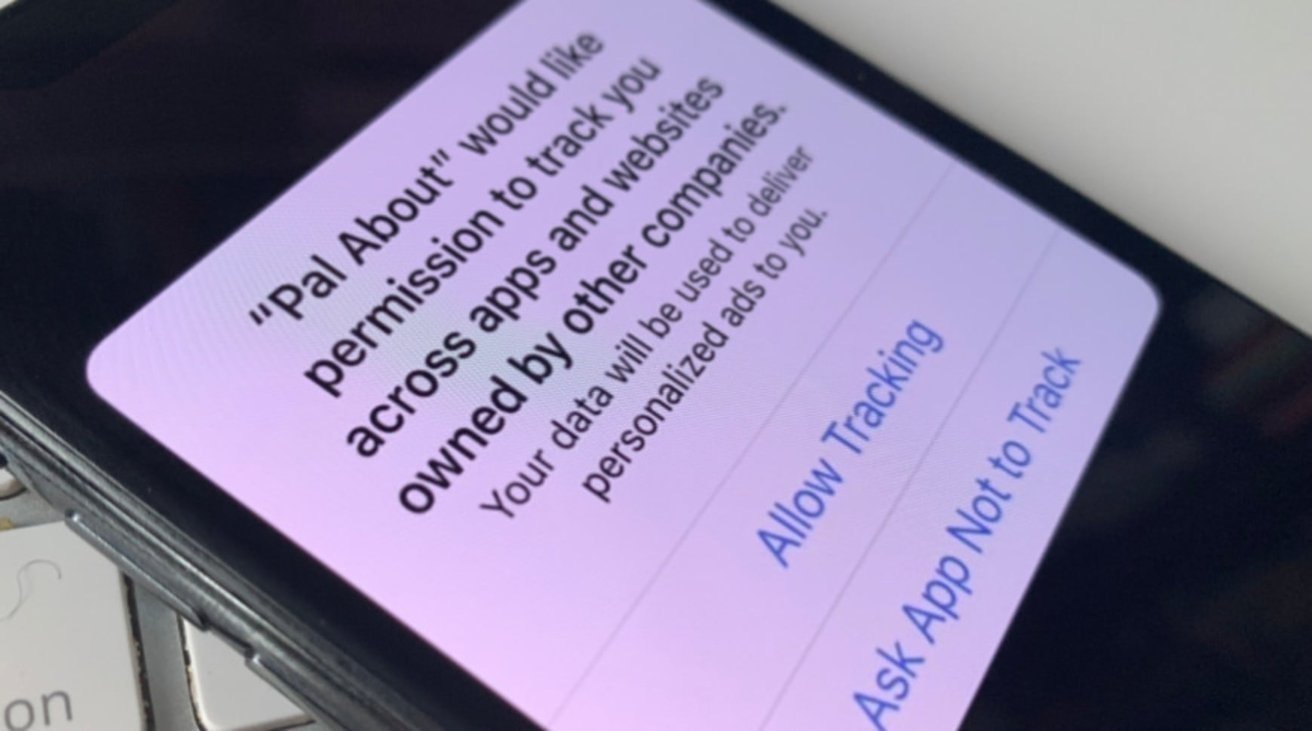 App Tracking Transparency, another feature Apple is keen to implement, will force apps to ask a user’s permission before tracking the device for marketing purposes. While it is protective to user privacy, the byproduct of the change is that it can make it harder for advertisers to serve more lucrative advertising to people.

Cook said that ATT would be implemented in “a few weeks.”

The measures have led to a state-backed effort in China that intends to bypass ATT, among others. Apple has warned developers not to bypass ATT, and will be rejecting apps with so-called “device fingerprinting” functions that also get around ATT.

Probably the most vocal opponent to ATT has been Facebook, which has openly complained about the feature’s expectedly-imminent implementation in iOS. The social network ran ads in December warning that ATT could be bad for small businesses, as well as similar notices posted to Facebook’s SMB platform.

By January, Facebook CEO Mark Zuckerberg was reportedly readying an antitrust suit against Apple over the matter. However, by March, Zuckerberg offered that ATT could actually be beneficial to Facebook, in encouraging businesses to conduct more commerce on its platforms.

In a pre-release teaser, Cook revealed he was “shocked that there’s been pushback on this to this degree,” but wasn’t “focused on Facebook” to know how ATT would affect the social network.

Cook insists that Apple is “giving the user a choice” to allow tracking or not, and was shocked by the pushback. However, arguments against the inbound measures are characterized by Cook as “flimsy.”

ATT isn’t purposefully targeting the advertising and monetization of social networks and other industries, he adds. It’s all about user choice.

He “very emphatically” believes ATT’s implementation is the best choice to make for Apple. “Data minimization, getting as little as you need, making sure you need what you’re getting, challenging yourself to get less and less and less. And then security is the underpinning.”

In reference to the San Bernardino shooting and the legal fight over unlocking an iPhone at the heart of the investigation, Cook believes “that was the right fight. I think encryption is still under fire today.

Bringing up the lawsuit between Epic Games and Apple over App Store rules and policies, Cook said the principle at stake was “living up to the rules and the guidelines of the App Store.” He is optimistic that Apple will tell its “story” about security and privacy in the store. “We’re confident in our case.”

When pressed on why Epic couldn’t go its own way with its own app marketplace or a direct payment system and why Apple should have control, Cook said “Somebody has to.”

It’s down to the curation of apps that someone must work through, the CEO suggests. “Users aren’t going to come there and buy things if they don’t have trust and confidence in the store. And we think our users want that.”

Having a third-party store would be “sideloading” in Cook’s opinion, which would “break the privacy and security model.”

The App Store is an “economic miracle” to Cook, with millions of developers around the world earning from a market Apple helped create. On why Apple should have control over it, Cook again referred back to the need for curation.

Cook cites the 100,000 app submissions Apple receives “in any given week,” and that 40,000 are rejected for not working as described. “You can imagine if curation went away, what would occur to the App Store in a very short amount of time.”

Swisher brings up Tesla as part of a brief conversation on automotive efforts, such as Apple’s rumored Apple Car. Elon Musk was said to have been offered to have Apple buy Tesla, but that Cook wouldn’t take a meeting with him.

“I’ve never spoken to Elon, although I have great admiration and respect for the company he’s built,” Cook admits. “I think Tesla is has done an unbelievable job of not only establishing the lead but keeping the lead for such a long period of time in the EV space. So I have great appreciation for them.”

“The autonomy itself is a core technology” in Cook’s view. “if you step back, the car in a lot of ways is a robot. An autonomous car is a robot. So there’s lots of things you can do with autonomy, and we’ll see what Apple does.”

Cook refused the bait of answering whether Apple’s product could result in a self-driving system being offered, or in the form of an actual car.