Target is advertising a new OtterBox screen protector that the internet is getting excited about as maybe a herald of a refresh for the iPad mini — but there doesn’t appear to be anything to it other than human error.

The ad is for an OtterBox Kids Bluelight Guard Glass, which is listed as being an antimicrobial screen specifically for the current iPad mini 5 — but, as pictured, will not fit that device. The screen protector is listed as being 11 inches by 7 inches, where the iPad mini 5’s total surface area, including bezel, is 8 inches by 5.3.

That larger size is closer to the predictions of a revamped iPad mini, but supply chain leaks have suggested that would feature an 8.4-inch screen.

Target has previously advertised accessories for unannounced Apple devices, most recently for an 11-inch iPad, but also for an “iPhone 9”.

However, the only consistent part of this Target ad is that the product shots in it are cropping up in listings for other Apple devices too. OtterBox does generally appear to rely on the same tablet shots for multiple products, too.

As depicted in this OtterBox Kids listing, there are four illustrative product shots and not only do they not match the current iPad mini 5, they don’t entirely match each other.

One does show what could be an iPad mini, complete with Home button but also what look two smaller buttons at top right and left of the screen. While Otter’s own site does not list this specific product, it does include an iPad mini 5 screen protector which features cutout holes in similar positions. 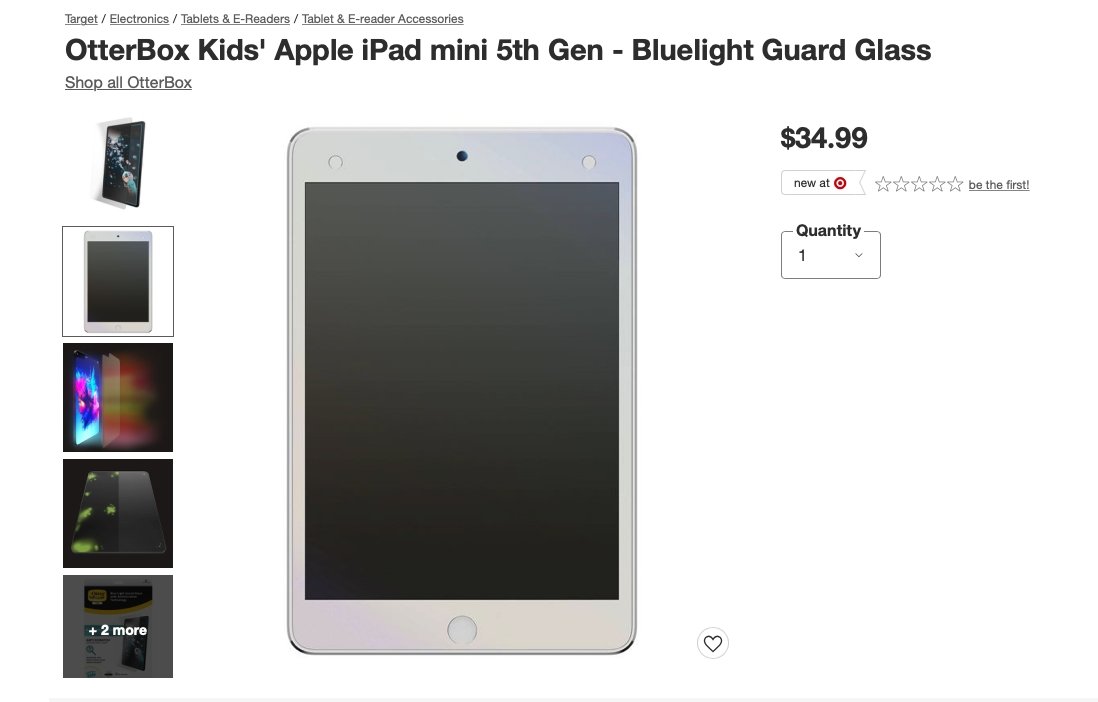 Target’s other three product shots do not show those holes. Apart from that, it is conceivable that each of these three is each showing the same item, which has no Home button, and a greatly reduced bezel.

Yet of those three shots, two show a different cutout in the OtterBox screen protector at top left. In the images where this cutout is present, the pictured “iPad mini” has a Face ID camera system.

OtterBox does sell an iPad Air 4 screen protector, which is an antimicrobial one. That does feature a Face ID cutout, but it’s correctly positioned for that iPad Air’s center notch.

If the cutout in Target’s product shots is a Face ID notch, it also features a previously unseen series of stripe-like segments. They resemble the kind of battery-level indicator found on some consumer electronics. However, Apple has not previously used this on an iPad — and one of the Target shots appears to show a regular iOS-style battery indicator icon too.

This could be a genuine leak of the proportions of an iPad mini 6. However, the details are contradictory, and the final box-shot of the product specifies that it is “for/pour iPad mini (5th gen).”

It seems vastly more likely that there has been an image error in either Target or OtterBox’s databases, and the wrong product shots are being displayed. That said, if it is a database mistake, it extends to the text specifications as well.

The OtterBox Kids Blue Light Guard screen protector is not yet on sale on the company’s own site. It is mentioned as coming soon, but there are no specifications or clear product shots yet.