The HyperJuice Magnetic Wireless Battery Pack — its full official name — is very similar to others that have hit the market. It does have its own design that is perhaps a bit more ergonomic than others.

A simple design for a simple task 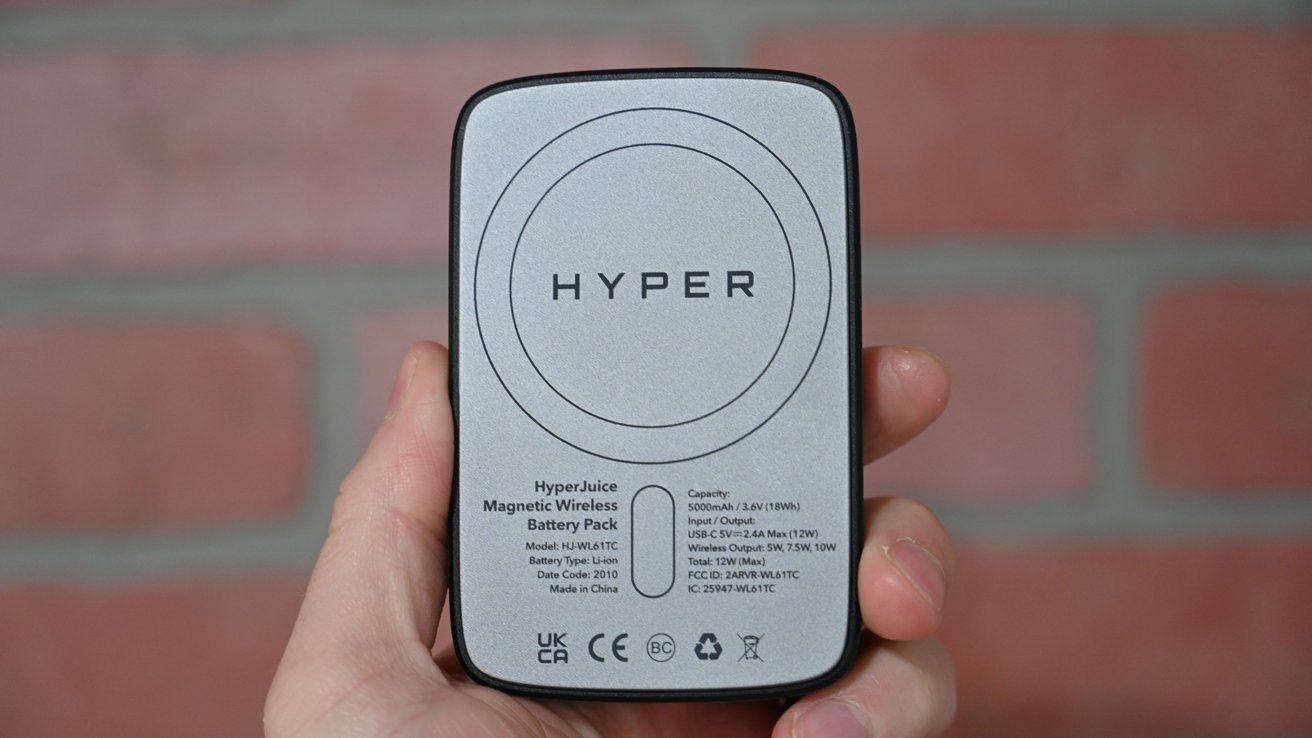 To be clear, this isn’t a proper MagSafe battery pack. It is basically a Qi charger with magnets, so it lacks the faster 15W speeds of an actual MagSafe charger.

As it stands, there are no official MagSafe chargers available, so this as good as it gets for the time being. 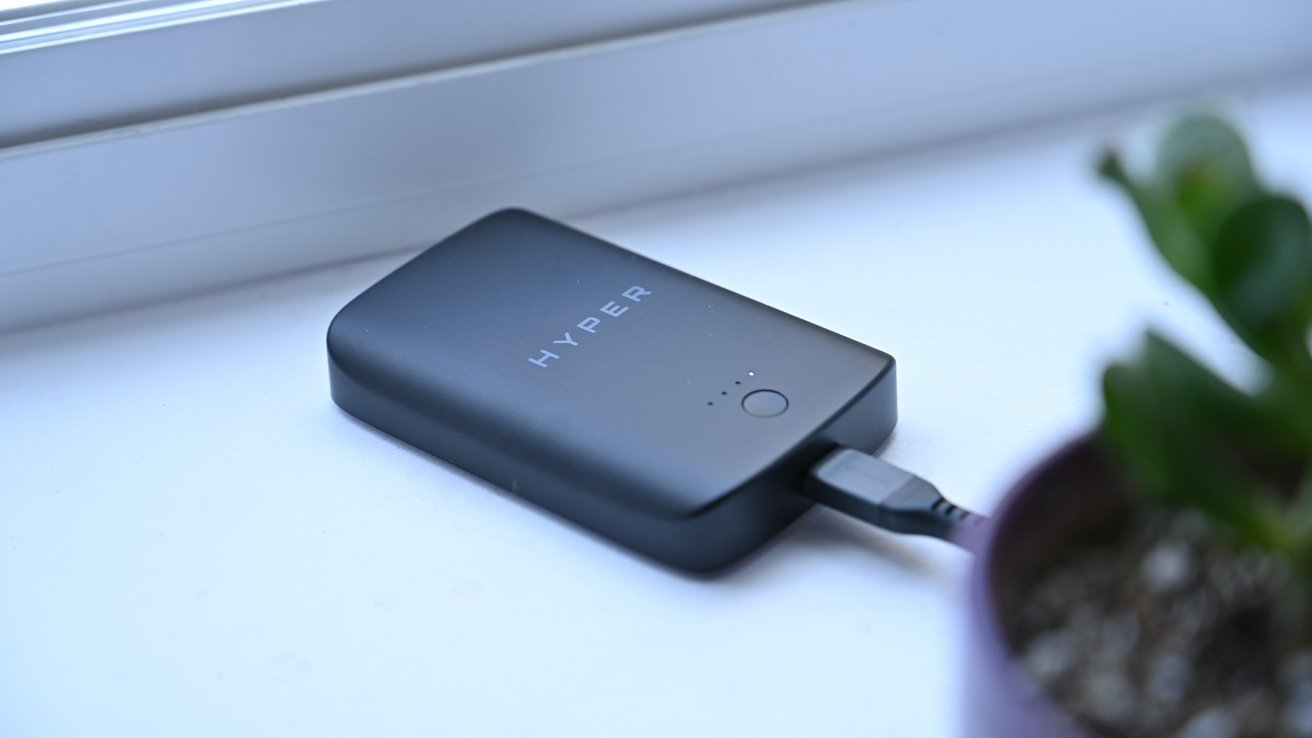 The outward-facing side is a semi-gloss black plastic. It doesn’t have a soft-touch finish and instead has a typical plastic feel.

A light grey Hyper logo is printed on the center of the back. It has a slight curl to the sides, making it a bit more ergonomic when sitting in the palm of your hand.

Towards the bottom of the back is a sole button used to turn the battery pack on or off. This is just below a quartet of LEDs that each represent 25 percent of the remaining battery. All of this is pretty typical in terms of portable battery controls. 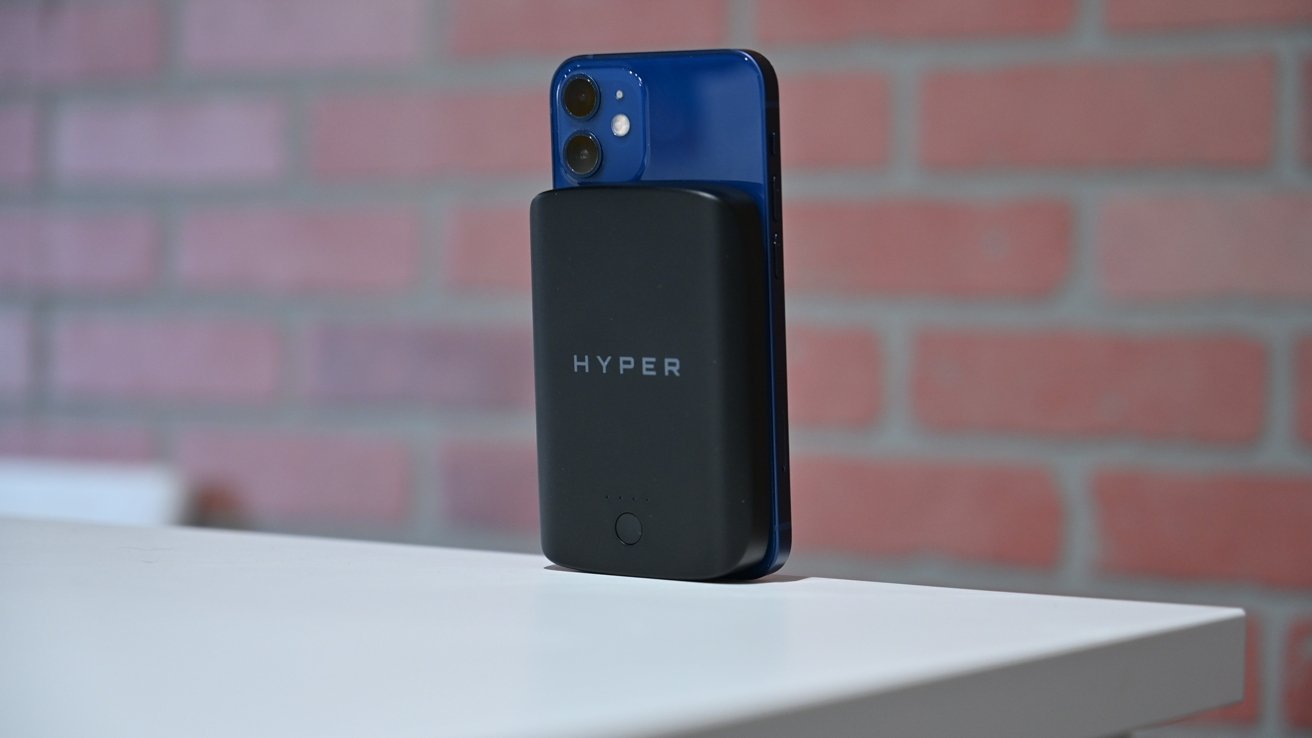 Pulling double duty as both an input as well as an output is a solitary USB-C port. You can use this port to charge any device over USB-C at up to 12W, and it can be used at the same time as the wireless charger.

While that 5,000 mAh capacity may limit you, it is still convenient to charge two devices at once. That may be just enough power for you and your partner during a night out if both your phones start to die and if you have a short jumper USB-C to Lightning cable handy.

It is no wonder these battery backpacks are so popular right now. They magnetically snap to the rear-facing magnets of the iPhone 12. There’s no cable necessary, they’re rugged, and they provide a decent boost when you need them.

Hyper got a lot right with its HyperJuice battery in particular. The dual output is a nice touch that has already come in handy for us during testing. The back LEDs are very easy to see to keep an eye on the remaining charge. 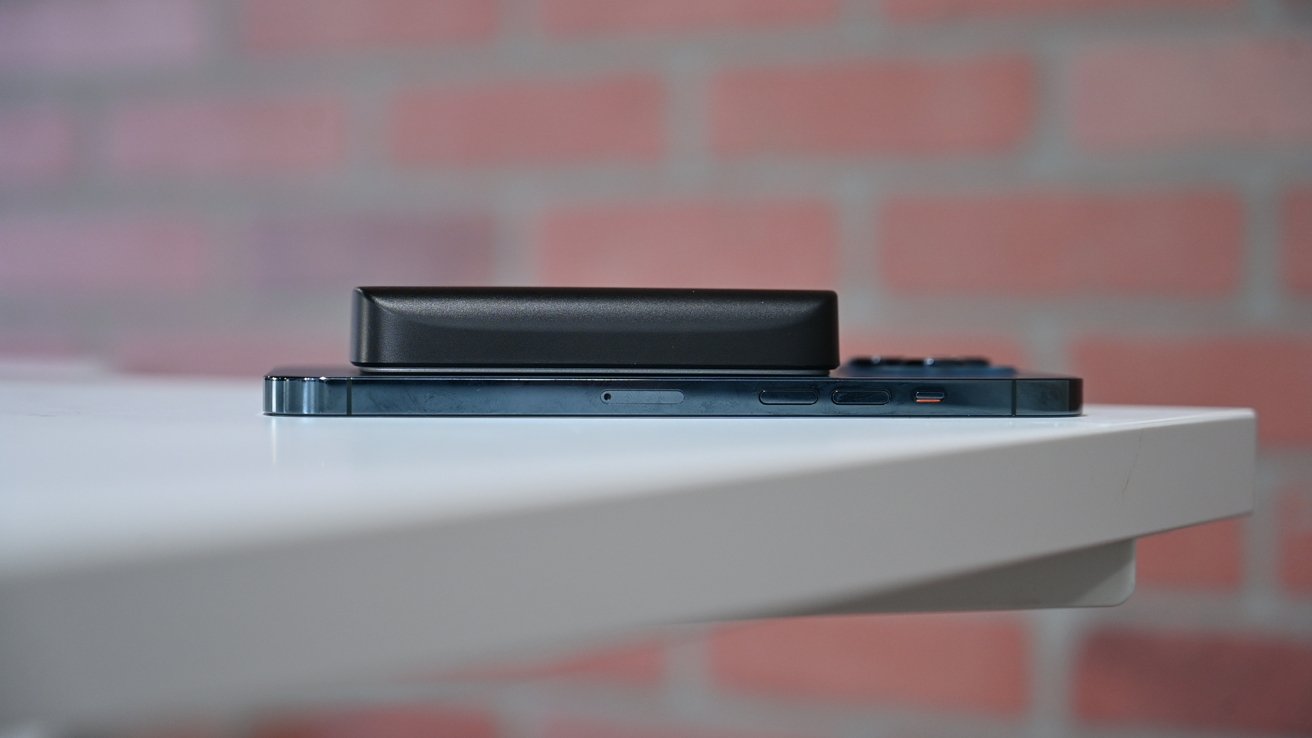 HyperJuice Magnetic Battery is rather thick

We also love the pass-through charging feature. It will always charge your phone first, so if you have a USB-C cable, you can effectively use this as a standard Qi wireless charging pad.

You can place your phone on it and charge, regardless of whether the HyperJuice battery is charged or not. It will pass through 7.5W of power to your phone, and once your phone is charged, it will power up the battery.

It works with cases as well, assuming you have a MagSafe-enabled case.

However, in such a compact device, there are sure to be limitations. For example, the USB-C port can output 12W of power by itself, but that is also the maximum output for the whole device.

If you are wirelessly charging at 7.5W, that leaves you only 4.5W for the cable. The battery will automatically choose the best rates for each side, but you won’t get more than 12W total combined output at any given time. 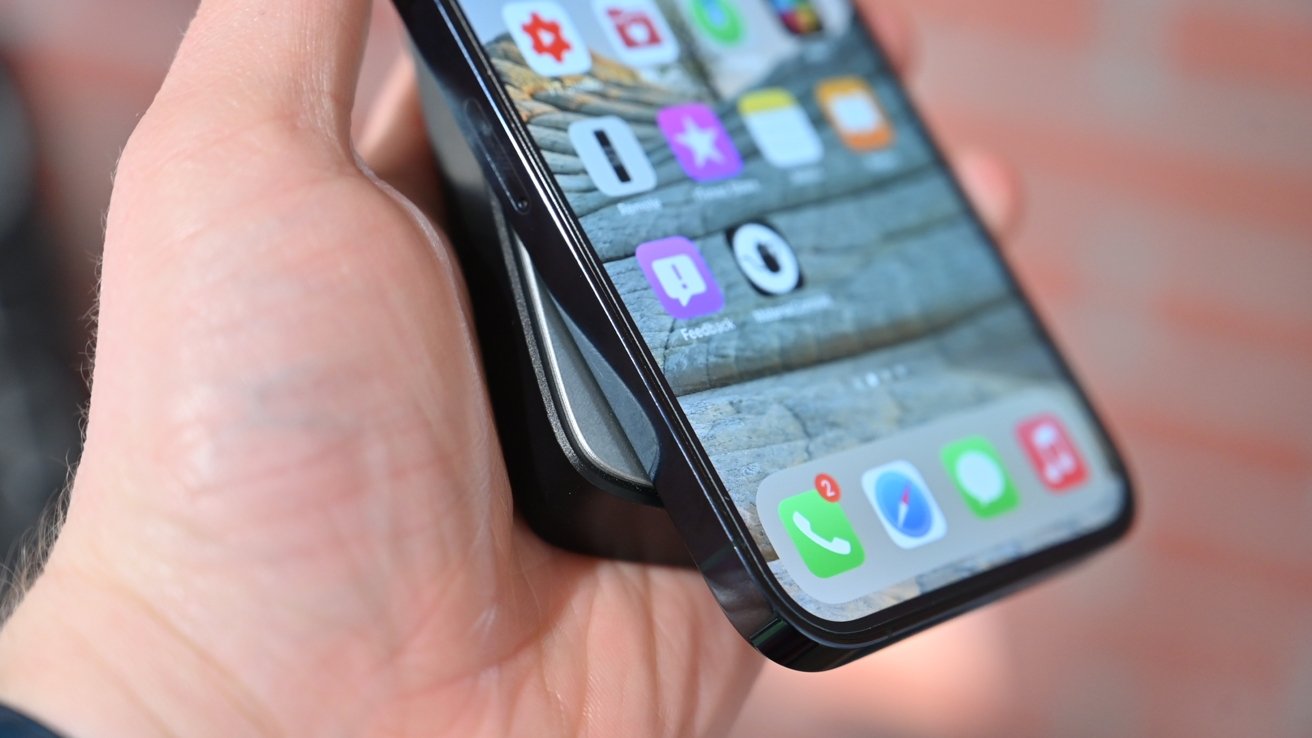 HyperJuice Magnetic Battery slips a bit in your hand

It also tends to rotate on the back of our iPhone. If you picture how you hold your phone, the center of your palm doesn’t follow the centerline of your phone. Therefore, given how most people hold their phones, the battery will spin a bit in hand.

Since this battery has a plastic backing, it’s somewhat slippery with very little grip. Had there been a rubber back or a soft-touch finish, it may have helped it stay in place more.

In our experience, using a MagSafe case helped. If it has a leather or silicone exterior, it gives the HyperJuice more grip.

Should you give the HyperJuice Magnetic Wireless Battery Pack a try?

We’re a little bit torn on the HyeprJuice battery pack for iPhone 12. The idea is great; it works well, it feels sturdy, and carries a fair price tag. 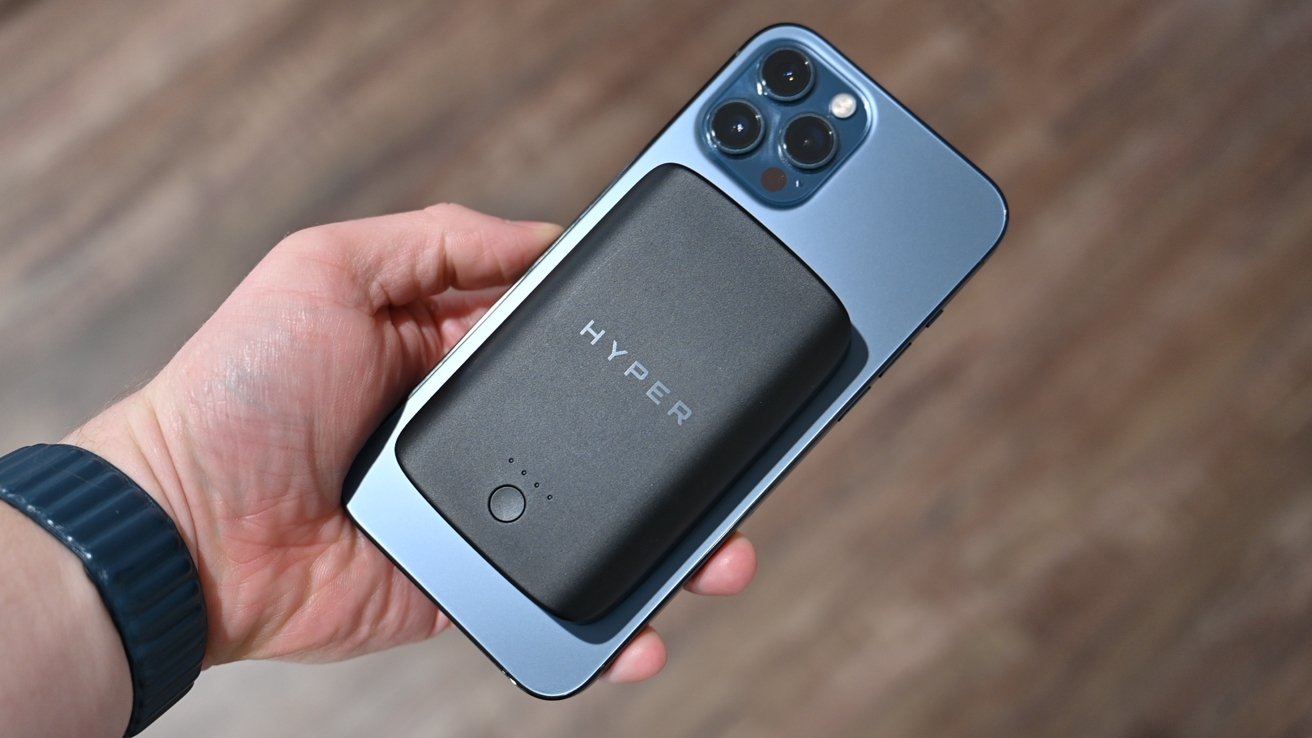 But Apple seems all-but-certain to introduce its own variant that will undoubtedly be better. An Apple model could integrate into the battery widget, use Lightning, charge at a faster 15W, and possibly offer a wireless input like its existing battery cases.

With Apple’s model looming, it gives us a slight pause about wholeheartedly recommending the HyperJuice battery or any other magnetic wireless battery packs that are out there. But, so long as you understand what you’re getting and the likelihood of a better (and probably more expensive) alternative arriving in the future, HyperJuice will get the job done.