Apple is investigating how to build a MacBook Pro which could lift itself automatically to provide greater ventilation in intensive work when components are running hot.

Apple has previously researched a bendable version of the MacBook Pro, one whose chassis has a seamless hinge instead of the regular two-part clamshell design. One benefit of that would be that the display would open without a complex mechanism connecting it to the base.

None of us think about how the display connects to that base when we open a MacBook Pro, but it seems that Apple does. Newly-revealed patent application “Deployable Feet for Display Articulation and Thermals Performance,” is concerned with multiple issues, but one is over how the display is potentially at risk when opened.

“For instance, many laptop computers are designed to have a base portion positioned on a support surface, such as a table,” says Apple. “Certain designs of electronic devices allow for the edge of the display portion that is proximate the hinge to rotate below the bottom of the base portion.”

The obvious answer is to make the base thicker, to keep the display clear of the table. Apple says that would also solve certain other issues.

Apple will never rush to make something thicker, but it does say that there is some appeal in the idea. “[It] can be desirable for an electronic device to include deployable features that can both increase clearance of the base portion and also improve the efficiency of the internal volume of the base portion, while maintaining a portable and sleek form factor,” says the patent application.

Nonetheless, there “is a strong demand for electronic devices… to be thin and lightweight,” while “simultaneously including numerous features delivering high performance.” We want it all, in other words, and Apple has an idea.

Right back at the start with the PowerBook 100, Apple had a pair of rotatable feet on its laptop. A simply plastic structure, users could twist both around so that the PowerBook was elevated at the back, increasing the typing angle.

This new patent application suggests doing something similar, but not with a pair of feet at the back. Instead, the entire bottom base of the MacBook Pro could be a “deployable feature,” like one very big foot.

That would clearly address the concerns about the bottom of the display casing cracking against table tops. It would also, seemingly as a happy byproduct, mean that such a MacBook Pro would have a slanted typing angle.

What Apple seems to be most interested in, though, is how having such a structure could actually alter what components can be included in the MacBook Pro. It’s not as if having a riser could mean bigger components — not since the idea is that it be raised up on demand.

Nor does it mean that a user could, for instance, insert extra components into the risen MacBook. It’s not going to be like the old PowerBooks that had bays where you could slot in optical drives, or extra batteries.

What it could do instead, is allow for components to run faster — and therefore hotter — than normal. The greater volume, the greater possibilities for vents, and thereby air circulation, would allow a MacBook Pro to perform more intensive tasks than before.

“”In some examples, an air-moving component or components, such as an intake fan and/or an exhaust fan, can be at least partially disposed in this internal volume…,” says Apple. “The intake and/or exhaust fan can force air to move from the ambient environment into the internal volume… to provide cooler air to transfer thermal energy from the object and significantly increase the rate of cooling.”

The patent application does not discuss many specific examples of how this would be a benefit, but it does detail many ways in which raising the MacBook Pro could happen. Clearly, a user could choose to use this “deployable feature,” either through some physical movement or via software control.

That does raise the potentially spooky scenario where a lab full of Macs will see various MacBook Pro models raising themselves on their haunches, and presumably lowering themselves again later. 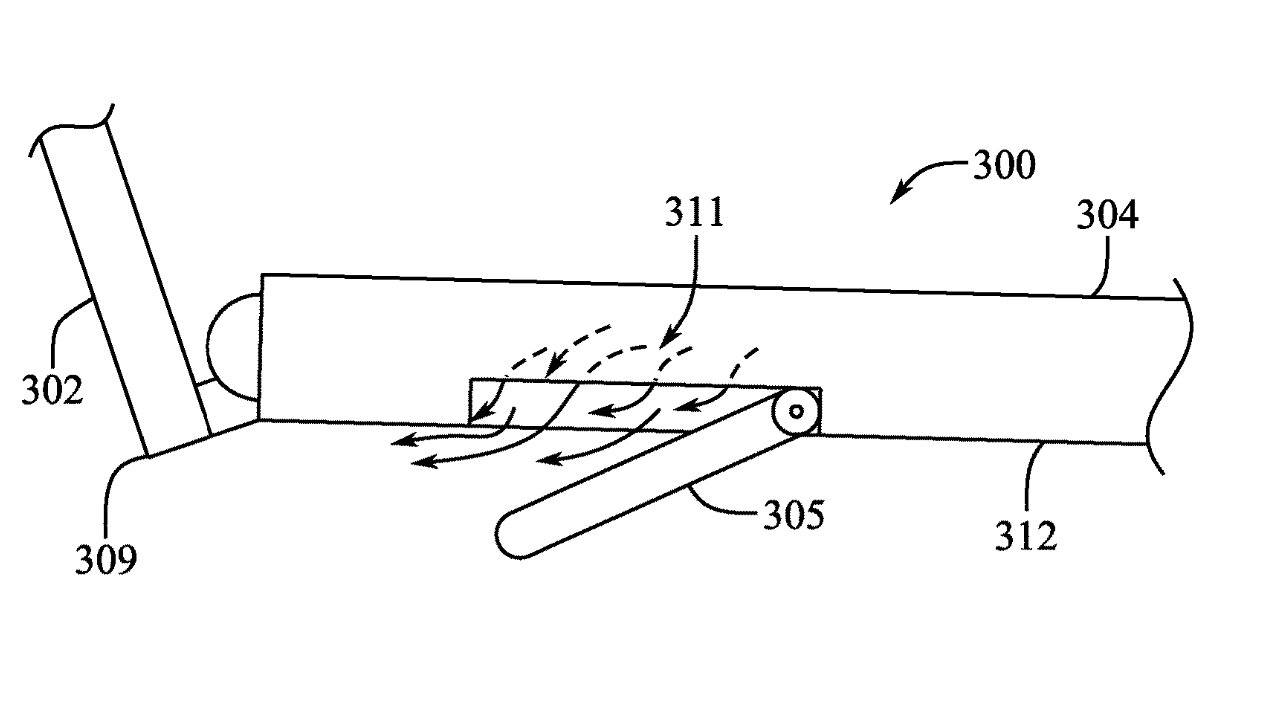 One alternative option described is to have more feet-like structures

But it would also combat an issue Apple users have been facing, particularly with Apple Silicon M1 Macs. Although there are other issues differentiating, for instance, the 13-inch MacBook Pro from the MacBook Air, the key one is running temperature.

Both machines run on the same M1 processor, yet the MacBook Pro is the better buy for, say, video editors. That’s specifically because it is able to run faster, and therefore hotter, for longer periods because of the better ventilation in its chassis.