Apple Pay could automatically select specific credentials depending on the location, with a future version potentially able to take advantage of an iPhone’s ultra-wideband technology to make sure the right card is used.

Apple has made the iPhone an almost indispensable item for everyday life, especially where payments are concerned. Users frequently perform Apple Pay transactions via their devices, registering multiple bank and credit cards for use in mobile payments.

The Wallet within iOS is also able to handle other types of cards, such as reward cards and boarding passes, which can be presented for their related purposes when required.

However, aside from the default payment card, users have to manually scroll through a list of stored cards to fish out the one they need for a situation, if it’s not the default card.

In a patent granted to Apple by the U.S. Patent and Trademark Office on Tuesday titled “Location-based credential selection for wireless transactions,” that search for the right card could be a thing of the past.

In essence, the patent suggests that a device like an iPhone could automatically present the correct credential or payment type for a nearby terminal. It does so by detecting a nearby terminal using radio technologies, such as ultra-wideband, to determine relative distance and to confirm the type of terminal being used.

The system consists of a secure transaction subsystem and a processor, with the former set up to store multiple credentials. The processor is set to receive encrypted radio polling messages from other devices, to respond, and to receive location data back from the nearby transmitter.

The distance is used to determine how far away the iPhone is from the terminal, to make sure that it is within a specific range before performing any further transactions.

If that distance is within range, the processor then uses the data gathered in polling to determine and select the appropriate credential to provide. 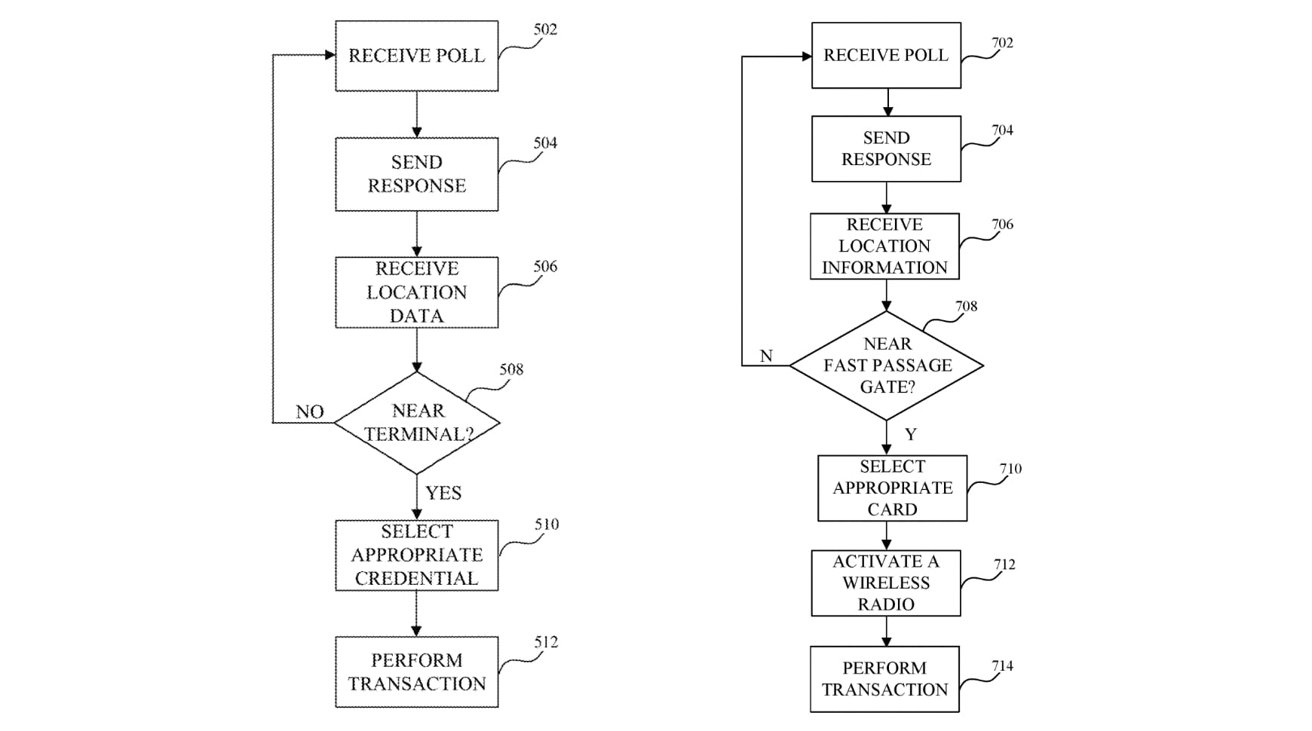 The selection could be made based on the specific type of terminal being used, such as one used by transit authorities for train payments, which could trigger a regional transit pass to be used for fast-tracking purposes. A terminal in a supermarket may automatically trigger the use of a rewards card.

It could even be feasible for such a system to allow specific payment cards to be used in certain stores. For example, a credit card that provides bonuses for purchases from one retailer could be favored for such a transaction over others.

While this could be automatic, Apple includes the possibility for the system to alert the user to the type of card, pass, or other credential being used, to prompt a confirmation for a transaction to take place, or to authenticate the user for a payment.

The patent lists its inventors as Matthias Lerch and Florian Galdo, and was originally filed on September 28, 2017.

Apple files numerous patent applications on a weekly basis, but while the existence of a patent indicates areas of interest for its research and development teams, there’s no guarantee the concept will be used in a future product or service.

Apple already provides some location-based functionality for passes, such as a boarding pass showing onscreen when at an airport. Express Travel is also available for iPhone and Apple Watch users, enabling payment for travel by tapping a terminal, without necessarily requiring a full Apple Pay transaction.

Then there’s CarKey, which allows users to unlock supporting cars by tapping their iPhone, as well as to let the user start the vehicle.

In terms of other patents, Apple has repeatedly filed patent applications relating to secure credentials, potentially allowing an iPhone to be presented as a substitute for a passport or for other secure identity-based applications.

Apple’s proposed system would also give Apple more use of UWB as a technology. Along with its use in the long-rumored “AirTags,” it is currently used for device location and range-finding for AirDrop and for handing off audio over to a HomePod Mini.